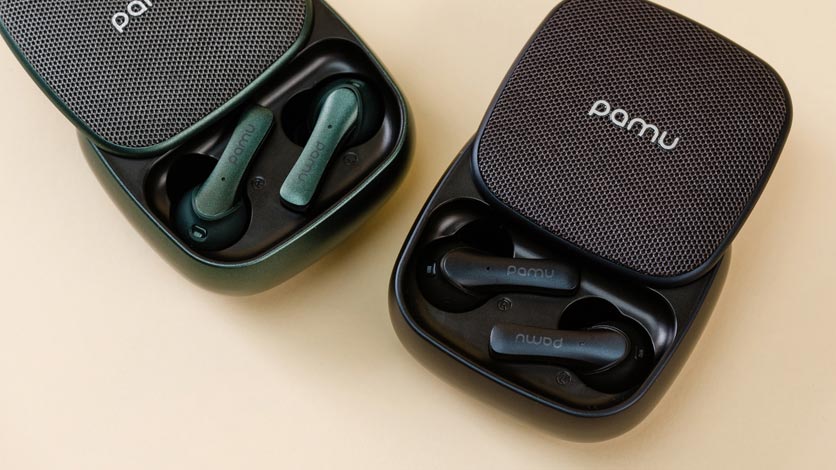 Truly wireless headphones have become even more crowded in the world market – the young brand Padmate has appeared there, whose products look interesting against a generally pretty boring background. Last year, the first model was released – PaMu Scroll. Her success may have seemed fleeting, but the recently released PaMu Slide speaks about the seriousness of the intentions and capabilities of the brand.

PaMu Slide is available in three color options: white, black and dark green metallic. The latter is most effective, and the charging case is especially good – it resembles a miniature Bluetooth speaker in shape.

On the top cover under a grid covered with fabric, LEDs are hidden showing the charge level of the case. The lid does not rise, but moves – it resembles old mobile slider phones. In the PaMu Slide, on one side there is a USB Type-C connector for charging, and next to it is a button. If you click on it twice, it will light up, and the cover will go into wireless charging mode for the smartphone. The coil is located on the underside, so the box needs to be turned over. Of course, the battery capacity of the case is not so great – 2000 mAh, but still more than many other TWS-models. In any case, if the phone has sat down, and the headphones still have a charge, then you can use it. Note that there is also a more affordable version without the wireless charging function – PaMu Slide.

And what’s under the cover?

Not only that, the headphone cases have “shoots”, they themselves are too large. This made it possible to place inside the battery of increased capacity and a Bluetooth antenna with high gain. Therefore, the battery life was solid, and the reception stability is good. The audibility of the owner’s voice during telephone calls is also pleasing – for this, thanks to the two microphones on the headphone.

But the waveguides are short, so for some people the devices may not sit tightly in the auricle, which reduces the bass response even with the largest nozzles, so their selection should be treated more carefully. Speaking of nozzles: there are many, six pairs (along with those that are already installed). S +, M +, L + with increased height are added to the standard sizes S, M, L. There are plenty to choose from.

It is interesting that the nozzles are asymmetric and with an oval cross section (the same for waveguides). In theory, this reduces the pressure on the ear canal and makes wearing headphones more comfortable. Rearranging the nozzles with the elongated side up or down, you can change the return on the bass. With a very big desire, you can put standard foams with a landing diameter of 3 mm – with them the headphones sit denser and the bass becomes larger. There is no need to periodically correct them, sinking deeper. By the way, this has to be done with special care so as not to accidentally touch the touch buttons. Their functions on the right and left cases coincide with one exception: a long touch on the left earphone decreases the volume, and on the right – increases.

How do they sound

Thanks to Bluetooth version 5.0, the pairing process is extremely simple. At the very first, you need to get the headphones out of the case and start the search on the smartphone, subsequently they will join automatically. Support for AAC and aptX codecs allows you to count on decent sound. The frequency balance is even, it does not bulge and does not fail anywhere, high transparent, clean and not sharp. Bass just right: not a little and not a lot, while they are dense and clear. In general, the sound is pleasant, comfortable and expressive, it is quite comparable in quality with the sound of headphones of greater value from leading brands. The volume margin is enough to not listen to your favorite tracks on a noisy street or in the subway.

Padmate has been operating since 2010, but it only started to talk about itself in 2018, when it opened a crowdfunding company to finance the PaMu Scroll model. In fact, the company has enough money, because it is part of the large Chinese corporation Harda Group, created back in 1994. Yes, and Xiamen Padmate Technology Ltd. itself there is a development unit that employs more than 70 engineers and designers, a testing laboratory where products are tested, and production facilities equipped with the latest equipment, which allows producing up to a million units of goods per month. And this despite the fact that the company employs only 500 employees.

Why such a serious crowdfunding company? To find out how much the market is interested in the new product, study the needs of the audience and create a community of enthusiasts. With a goal of $ 10,000 for the release of PaMu Slide, they raised as much as $ 6,561,917.